The latest Sunday Edition of CBS News' 60 Minutes featured a very revealing and interesting interview with Jack Ma.    Lara Logan's interview was very revealing in many respects that underscored the drive and desire of someone who truly lived up to the Japanese Admonition to fall down seven times and stand up the eight.  The idea that someone was able to insure that within a span of 15 years be involved with almost 40 percent of the Chinese Population and be able to keep the Government of China at bay is just heartening.    He also underscored his bluntness when he noted his admonition to the Government:  Create Jobs or you're in trouble.

Jack Ma's bravado does mask some of the inherent challenges faced in China Today.    The Government in Beijing can take Alibaba over tomorrow and all that hard work will dissipate in a heartbeat.   The current Chinese Leadership, though, is not that much of a fool to do something as Alibaba begins its journey to dominate the World.     One other thing that US Companies should embrace was this;  Jack Ma's priorities.   He noted three key priorities:   customers, employees and Shareholders.    He was blunt:  If you don't like our philosophy, don't buy our shares.  It is a philosophy that is refreshing to hear which should be embraced by US Companies.

Beyond Alibaba, though, there is the plight of the company that also bought into Alibaba where few others did:  Yahoo.   Yahoo is staying in the game partly as a result of Alibaba and the successful IPO.   It made 6 Billion Dollars--but it is still trying to figure out how it lives on in the shadow of Google & Facebook.    This chart published by the Business Insider Team underscores the extent of the challenge being faced by Yahoo right now: 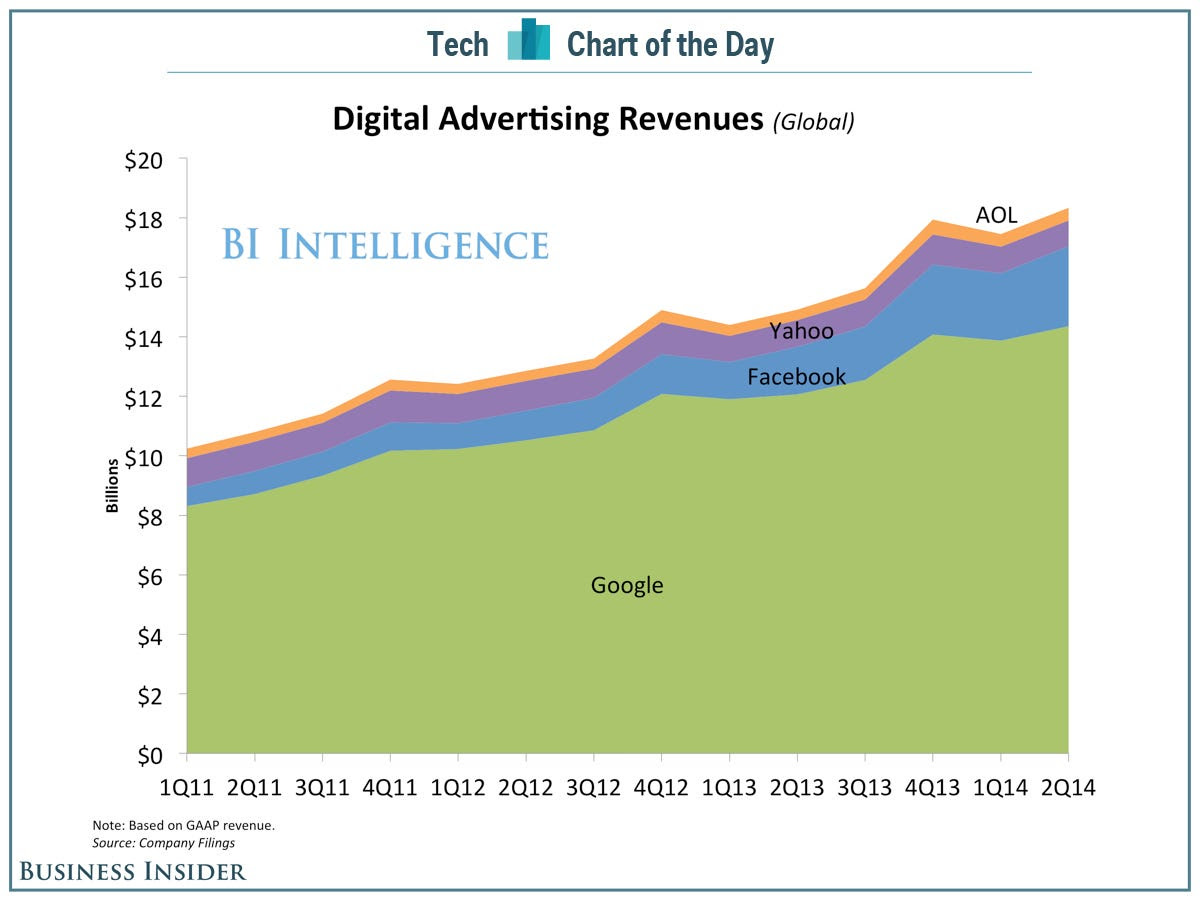 AOL is trying to be the "content company"--which can fit with Yahoo's strategy to move content with some of the moves it has made--including the hiring of Katie Couric.   The challenge is to assess whether the content is actually going to yield results--although one of Yahoo's Largest Shareholders wants to press the issue--and AOL's stock price reflected a confidence that somehow something might happen as reflected in this latest from the team @ Bigcharts: :

AOL, in the meantime, is trying to develop content and make its' mark on the Political, Economic, Religion and other channels.
Beyond Yahoo & AOL, Microsoft is continuing onward with its' transformation under its' new CEO.   One indication that the sense of faith continues to persist is the stock price as noted by Big Charts:

The stock is near all-time highs that underscores the sense of confidence that is ever so within Microsoft.   It is gratifying to see that Microsoft continues to push along on development and the idea that somehow Cortana can be incorporated into Windows 9 is fun and exciting to be witness to--even if the commentary in the Business Insider is not as "favorable" as one would like it to be:
Posted by TEST at 10:14 PM