It has been quite a year at Apple.  We have been reflecting upon a company that has done so much to help be at the forefront of the creation of the "vision of the possible" that we believe will continue.  It caused Apple to rise up to be the most valuable company in the World.

As it is with such companies, the World continues to take notice.  As part of the Winding down the Year, we decided to have a "look back" at quite a year for Apple on all fronts.  It all began with how it all started during the 3rd Quarter this year and Apple's latest "Big Day"-September 9.  Some  10 Million iphones were sold on the first Weekend Alone.   #Apple continues to be haunted by challenges with its' iCloud service.    When this crossed the wires from the Sydney Morning Herald,  it was a true moment of zen that prompted me to activate my calm.com App--this is as Apple touted its' "40 Hours" of work on the problem--and Dylan Tweeney's defacto indictment published over the W-End underscores the challenge faced by Apple.

The Quarterly Revenue Apple had during Q3 2014 said it all: 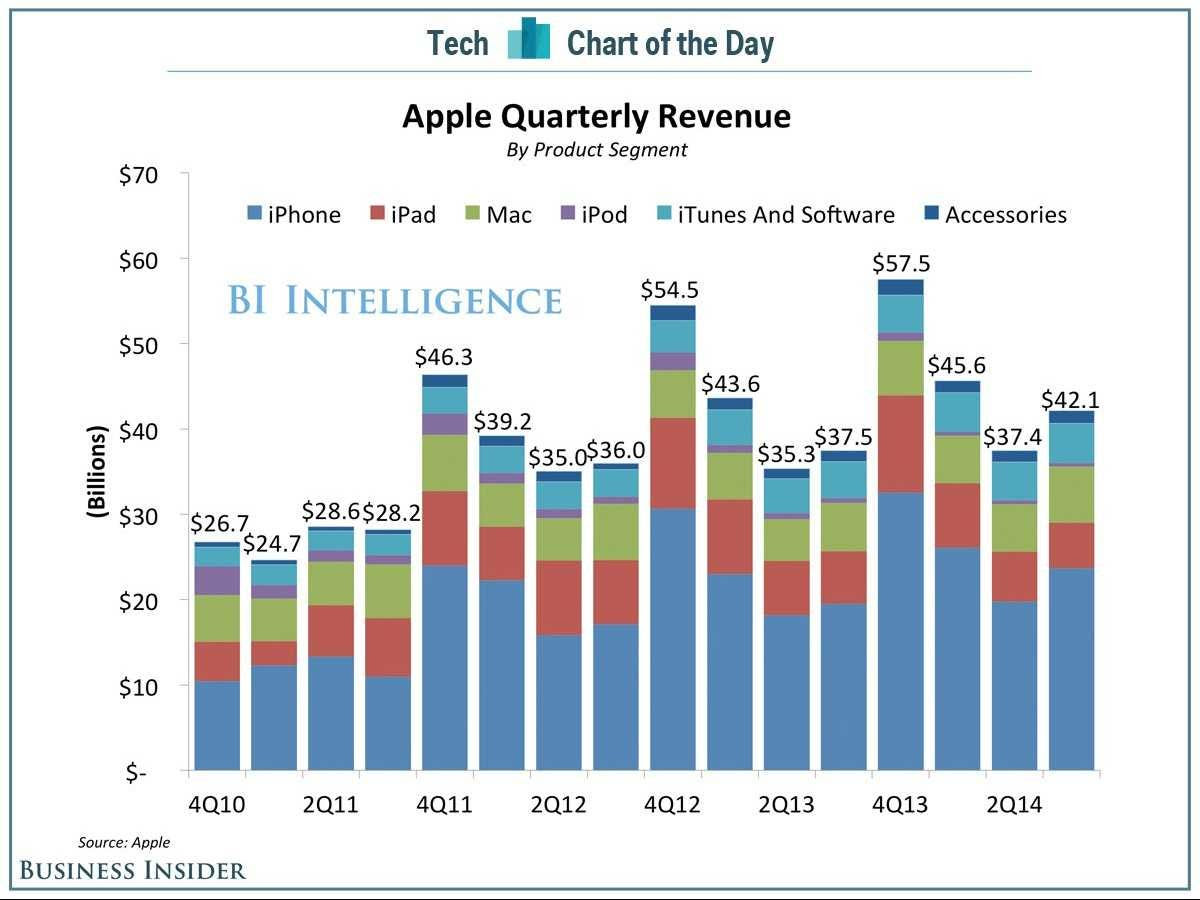 Apple on Monday reported earnings for its fiscal fourth quarter that ended Sept. 27, 2014. And with the exception of the iPad, Apple beat Wall Street's estimates across the board: Revenue, earnings per share, and even unit sales of the iPhone and Mac surpassed expectations.
As you can see from the chart below, which was provided for us by BI Intelligence, Apple's $42.12 billion in revenue is a big 12% jump from the same quarter a year ago. It was Apple's best September quarter ever — thanks in large part to the iPhone 6 and iPhone 6 Plus, which continue selling like hotcakes; the iPhone in general accounted for 56% of the company's revenue this quarter. But the real surprise is the Mac, which had its best quarter in Apple's history with 5.52 million unit sales; the Mac accounted for more of Apple's revenue than the iPad (16% versus 13%, respectively). Apple expects an even bigger December quarter, projecting $63.5 billion to $66.6 billion in revenue for the holiday season — that would make it the company's most successful quarter in history.Read » 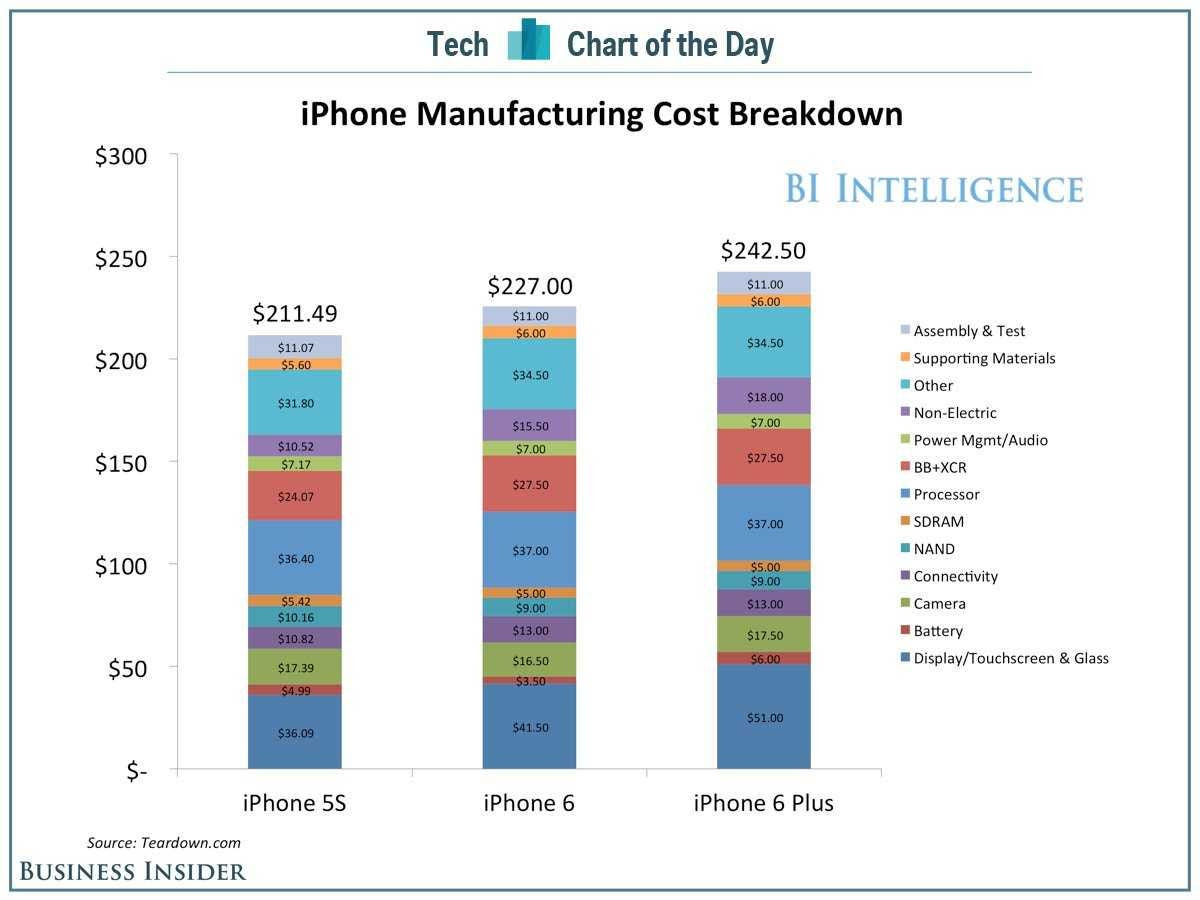 Based on a manufacturing cost breakdown from Teardown.com and research firm IHS, which was charted for us by Business Insider Intelligence, Apple will likely make huge margins from its latest phones due to the low cost of materials. The iPhone 6 and iPhone 6 Plus cost $649 and $749 without a contract, respectively.

As we have seen the iphone 6 continues to make inroad, the Venture Beat's Dylan Tweney wrote a rather telling indictment of it which we decided to publish it in its' entirety--although it seems as if Apple continues its' inroads ever more throughout 2014:

What was also telling was how iPad's continue to see a slow death to their sales.    The problem is the broader tablet market as cheaper tablets and "phablet's continue to make inroads: 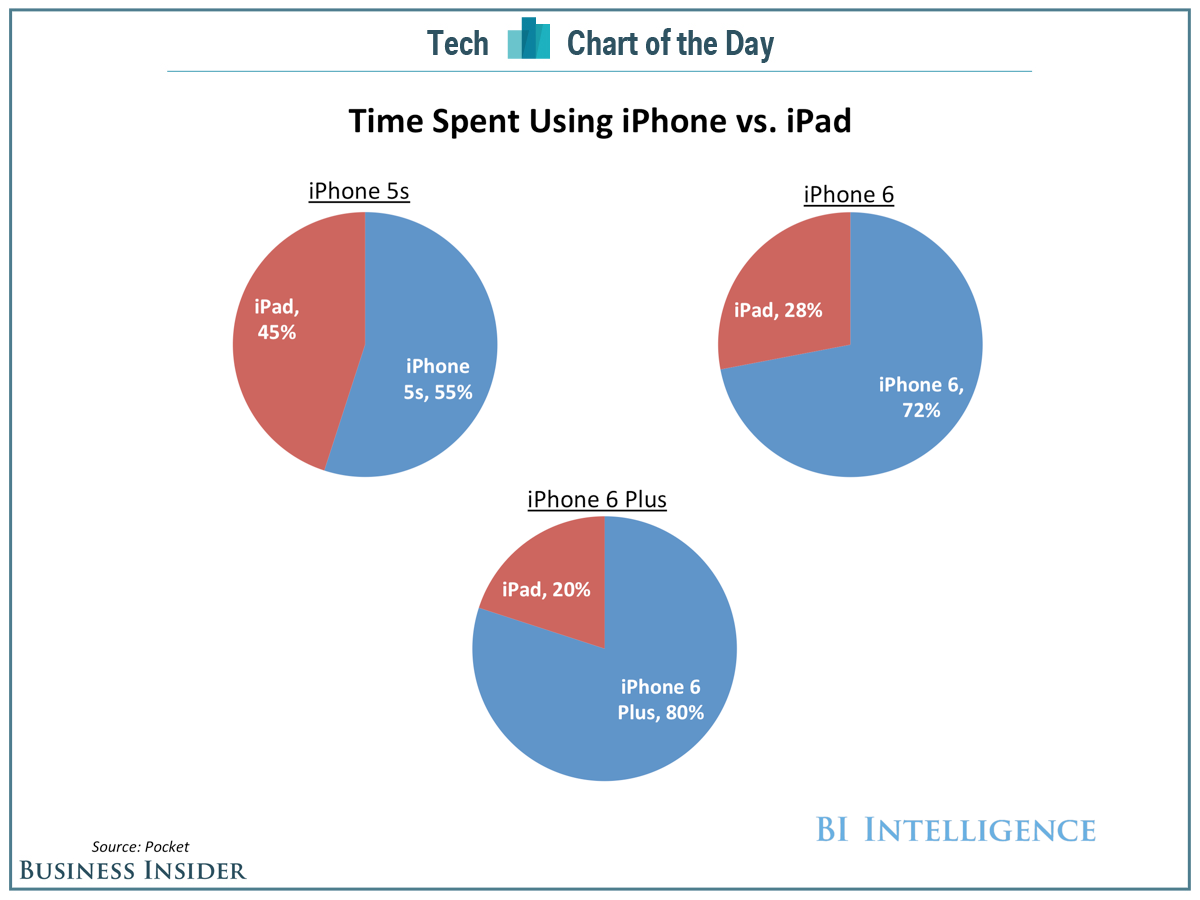 The iPhone 6 Is Killing The Need To Own An iPad

Pocket, a service that lets people save stories and videos to read/watch later, published data on how user habits are changing thanks to the bigger screens on the iPhone 6.

If this trend holds for other apps and services, it spells doom for the iPad. If someone only needs an iPad 20% of the time, Apple is not going to sell very many iPads.  Read »

We here @ #Outsiders are users of Pocket as well for our on-going research and view this as quite compelling since there is no need for iPads.    Amazon, in the meantime, is making profound inroads as it announced its' $ 99 Kindle HDX this year.    It was quite compelling as Apple CEO, Tim Cook, discounted Amazon's threat to its' business.

We continue to be fascinated by Apple Watch and Apple Pay and eagerly await its' arrival in 2015.     But, many have already been "one step" ahead of it which we've also followed-including Pebble.     Disruptive innovation will continue as noted in this tweet reported by our friends at the Business Insider earlier in the month:

We were also quite taken aback as we reviewed these reports earlier in the year from the Sydney Morning Herald as the controversy over iCloud's Hacking which will continue ever more especially as Sony's latest hack shows the continued challenges in the area of the cloud: