Notations From the Grid (Weekly Edition): The "Unmanned" Navy is Before Us

As the debate over autonomous vehicles gathers steam around the World, what we picked up courtesy of military.com is worth noting that is not getting much notice.   We hereby present it for this edition of Notations here in our Visions Property: 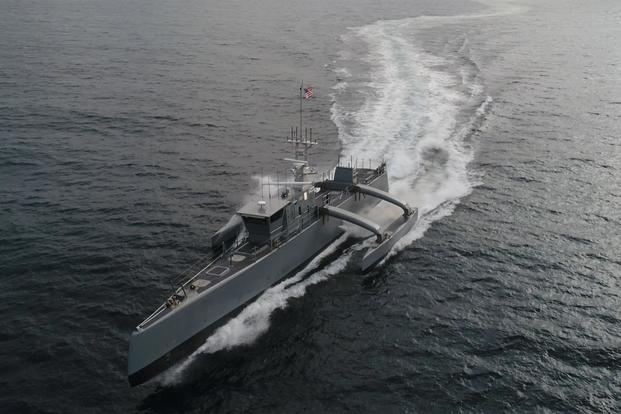 The unmanned prototype ship ‘Sea Hunter’ is part of the Anti-Submarine Warfare (ASW) Continuous Trail Unmanned
Vessel (ACTUV) program. (U.S. Navy)
Military.com | By Gina Harkins
As the Navy advances plans for a 10-ship "ghost fleet," leaders are assessing how much decision-making power to give large unmanned vessels that can operate without any humans aboard.
The Navy wants $400 million in fiscal 2020 to build two "large unmanned surface vessels." Budget documents show service leaders plan to request $2.7 billion to build 10 of the ships over the next five years.
But with the programs still largely in the research and development phase, the plans raise questions about what the Navy is actually planning to buy, and how those ships would function in the real world. Not only is it unclear exactly what these future unmanned ships will look like, but also what capabilities they'll have.
"Doing [research and development] and figuring out exactly the capabilities that we need, it's critical," James Geurts, the Navy's assistant secretary for research, development and acquisition, recently told lawmakers. "...The real R&D is in a lot of the guts: the autonomy, the decision-making, how are we going to control it, how are we going to do those things?"
The service has completed the first phase of testing on its large unmanned surface vessel, Geurts said, but much about those plans is shrouded in secrecy. Earlier this year, the Navy's 132-foot-long medium-unmanned vessel named Sea Hunter sailed from California to Hawaii and back again, mostly without anyone aboard. Officials declined to talk to Military.com about the transit, citing operational security while it's in development.
Rear Adm. Randy Crites, deputy assistant secretary of the Navy for budget, told reporters last month that the large unmanned surface vessels will serve "as both a sensor and a shooter." And since they're smaller than conventional ships, he added, the 200- to 300-foot vessels should be cheaper to produce and operate.
The Navy's budget also requests funding for dozens of underwater drone vehicles and unmanned aircraft.
Navy leaders are pushing funding for projects like the Sea Hunter as it faces new threats at sea from more sophisticated adversaries. The service's 2020 budget request has some in Congress questioning the decision to push an aircraft carrier into retirement early, but leaders say it's essential to use the savings the ship's retirement would provide on newer cutting-edge technology, such as a self-driving ghost fleet.
"[That] led to some tough choices," Geurts told lawmakers. "One of those is to retire that ship early in favor [of] looking at other technologies, other larger cost-imposing strategies."
The Navy's future aircraft carriers will include a mix of manned and unmanned aircraft and boats that can operate on the surface or underwater as the service prepares to counter more high-tech threats at sea, leaders have said.
Geurts said he expects to see the development of large unmanned vessels pick up quickly over the next year.
"It's less about the ship design, because you could make a lot of different ship designs autonomous," he told reporters last week. "The capabilities you would put on there could be fairly flexible and fairly mobile, so our real emphasis, and where I think you're going to see an acceleration versus a traditional shipbuilding program, is you're going to focus more on the autonomy technology -- the capabilities you want to strap onto the ship -- and less about the ship hull form."
The Navy is proving its ability to sail unmanned vessels with the Sea Hunter transit, Geurts said.
Posted by TEST at 12:00 AM