Notations From the Grid (M-End Edition): On Change Agents

As we look to a new Month, our Team reflected upon what we view as having been quite a month throughout our World with this from the team at the Daily Stoic.  We embrace optimism and hope which is why we settled on this as we gear up for a new month of deliberations here throughout our propertie:


Have you ever heard someone ask: "What would you do if you found out tomorrow that you had cancer?" The question is designed to make you consider how different life might be if you were suddenly given just a few months or weeks to live. There's nothing like a terminal illness to wake people up.
But here's the thing: You already have a terminal diagnosis. We all do! As the writer Edmund Wilson put it, "Death is one prophecy that never fails." Every person is born with a death sentence. You never know when it can happen but you know it will happen.
Steve Jobs, in his famous commencement speech, said that "death is the destination we all share. No one has ever escaped it. And that is as it should be, because death is very likely the single best invention of life. It is life's change agent." As he would put it later in the speech, "Your time is limited, so don't waste it living someone else's life. Don't be trapped by dogma — which is living with the results of other people's thinking. Don't let the noise of others' opinions drown out your own inner voice. And most important, have the courage to follow your heart and intuition...Everything else is secondary." Yet it is so easy to forget this. And really smart humans forget it all the time—and have for centuries.
One of the reasons we created our memento mori medallion is so that is less likely to happen. We were inspired by the 17th century art form known as vanitas which featured symbols of mortality to encourage reflection on the meaning and fleetingness of shortness of life. In a more modern connection, the coins are actually made in the same 100+ year old mint where an employee named Bill Westman decided to produce the Alcoholics Anonymous chips. Westman’s advice to recovering addicts was to “carry this in your pocket or purse and when temptation is great, reach into your pocket and feel the medallion and remember your struggle to get this far.”
That’s the practical value and importance of memento mori—in whatever form you chose to practice it in. Keep something in your pocket or on your desk as hard evidence of the undeniable truth that you could leave life at any moment. Because it’s the one prophecy that never falls.
The truth of that shouldn’t depress you. On the contrary, it should, as the quote on the back from Marcus Aurelius says, “determine what you do and say and think.” It should make you better. It should let you: Live more. Learn more. Love more.
P.S. You can check out our memento mori medallion over at the Daily Stoic Store. 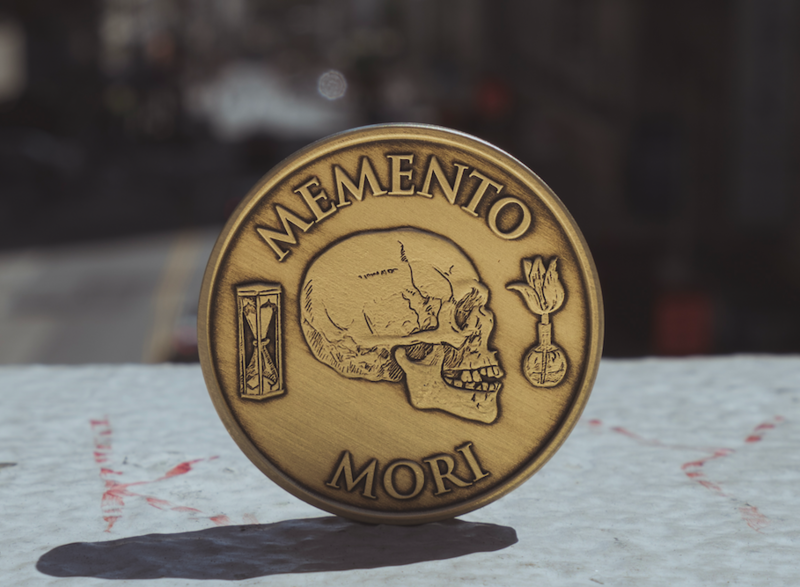